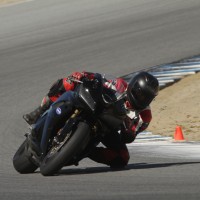 With a little over a month until the FIM Europe – European Superstock 600cc Championship kicks off at Motorland Aragon in Spain, American Brandon Kyee (who will compete for SCHACHT Racing) has been in action at the Laguna Seca circuit to shake off the winter cobwebs.

Teenager Kyee is stepping up the ultra competitive Superstock 600cc category after two successful seasons competing in the European Junior Cup in which he achieved two podium finishes.

Brandon completed two full days with the Yamaha Champions Riding School with a heavy focus on body positioning and braking techniques. He worked with some great instructors at the school like Nick Ienatsch, Ken Hill, Shane Turpin and former WSBK Champion Scott Russell. After 2 days of instruction with a lot of track time, Brandon feels much more comfortable and confident. He hopes to get a few more track days in before heading to Aragon, Spain for the opening round of the FIM Europe – European Superstock 600cc Championship in mid April.

Photos provided by Joe Salas and Tomas Covinha from www.4theriders.com.