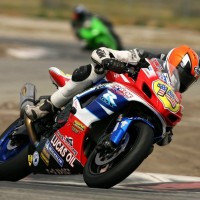 Danish American Christopher Hower is gearing up for his 2013 season with the ambition of securing a wildcard entry to the final CEV event in Spain later in the year.

After spending a year riding in the US, Hower is back in Europe to contest both the Danish and Nordic Superbike Championships.

A clearly optimistic Hower had this to say. “My main focus is to win as many races as possible and to aim for the championship title, with the hope of getting a wild card entry to the final of the CEV. I’d like to thank Bike Promotion, Dave Moss Tuning, Jyske Bank and Move2Peak for all of their support so far and to Michael and everyone at MHP for their media coverage.”

Christopher is no stranger to success having previously won ‘best rookie’ in the DM class and has finished an impressive 8th overall in the championship despite only taking part in 4 events.

Michael Hill Promotions will be reporting on all of the action from Christopher’s return to European competition as it happens. We will also unveil Hower Racing’s 2013 machine and colour scheme shortly.