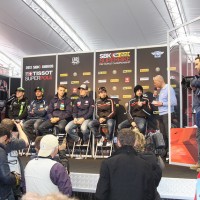 The organisers of the eni FIM Superbike World Championship have revealed that Michael Hill will be their official Paddock Show and Press Conference host for the remainder of the 2013 season.

Michael (a former racer himself) has spent several seasons working within the World Superbike paddock in a TV presenting and media capacity. He has also represented a number of riders in various classes and is naturally delighted to be given this opportunity.

“I am pleased to announce that for the remaining European rounds of the 2013 eni FIM Superbike World Championship I have been appointed as the official press conference and paddock show host. This means that I will be responsible for interviewing the riders who finish on the podium in all classes as well as the TISSOT Superpole front row in addition to hosting the paddock show at each event enabling the fans to get closer to the riders – which is one of the amazing features of this exciting Championship”.

This year’s championship is the first under DORNA’s new management structure.