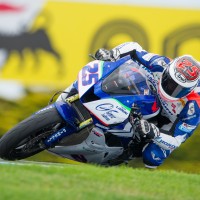 Alex Baldolini looked like pulling off a solid 11th position finish until tyre wear issues prevented any further advancement through the field.

The Lorini Honda rider had a difficult opening weekend to this year’s campaign suffering a fall on Friday and several set up isssues with his new machine. Despite these problems the former WSS podium finisher raced hard and after starting 20th soon found himself just outside the top ten.

A dejected Baldolini was obviously disappointed at the end of the shortened 15 lap encounter and he will now focus on achieving a stronger result when the championship heads back to Europe in mid April for round two.

Alex Baldolini (15th) – ‘It has been a weekend to forget. I am sorry for everyone who woke up or didn’t sleep to see me race. I was up to 11th but I had many tyre blisters during the last 6 laps. My tyres were finished and it was impossible to ride. I am very disappointed to have started the championship this way. We have a lot of work to do but we must look forward to Aragon where we will do our best to achieve the best possible result.’