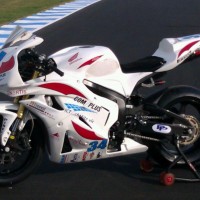 The H-Moto team rider who runs in the WSS Championship under the Com Plus SMS Racing banner improved his pace significantly throughout the session but crashed shortly after posting the 13th fastest time and will take no further part in the weekend’s proceedings.

He will undergo surgery at the earliest opportunity to allow him to be back on track for round 2 of the series at Motorland Aragon, Spain in April.

We wish him a speedy recovery.

More news when we get it