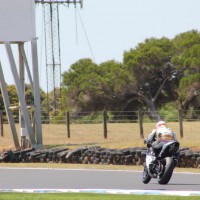 Italian Alex Baldolini had a mixed day in Phillip Island, Australia for the opening round of the World Supersport Championship.

After an encouraging test earlier in the week, the former 250cc GP and Moto 2 star was optimistic of a good result but a crash in the opening free practice session this morning left the Italian nursing a bruised knee and facing a race against time to make it out for qualifying.

The Lorini Honda team worked their magic and despite missing the opening ten minutes Alex qualified in a provisional 17th.

This may appear on paper to be a lowly position but with less than 0.7 seconds covering the riders placed 3rd to 18th, Alex is confident of qualifying stronger tomorrow.

Alex Baldolini (P17) – ‘It’s been a tough day. In the morning there were lots of crashes and I also crashed at the end of the session. It was an unusual crash and hurt quite a lot especially my hips and my knee. We were late to start qualifying as the bike wasn’t ready but the team managed to fix it. I was improving at the end of the session but I had a big moment in the last corner and I almost crashed again so I couldn’t improve. Third position is not so far, I just need to lower some tenths. Tomorrow we will try to improve the settings and do our best to qualify strongly.’

Sunday’s race has been reduced to 15 laps on the grounds of safety concerning tyre wear.