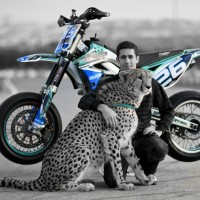 Televisión Española and Dorna Group have today announced an agreement made to broadcast the eni FIM World Superbike Championship for the next three seasons (2013-2015) on channels Teledeporte, TVE HP and RTVE.es.

Motorcycle journalist Marc Martín will be the main commentator, while former riders Rubén Xaus and Joan Lascorz will join him with their technical comments.

TVE’s sports channel Teledeporte will broadcast Superpole on Saturday and both Superbike races on Sunday. As long as it is feasible, it will also broadcast the World Supersport race. Apart from the races themselves, TVE will also make a preview TV program for each race with special reports, interviews and competition analysis. These programs will be simultaneously broadcasted on TVE’s high definition channel TVE HD.

TVE’s journalist Marc Martín is a former MOTOGP commentator and will be the main World Superbike broadcast narrator. Martín will have the help of two well-known experts: Rubén Xaus, active rider in the series from 1997 to 2011 and Joan Lascorz, rider from 2005 to 2012.

“World Superbike meant my whole life for many years and now I want to do my best as TV commentator in a world for which I feel a strong passion” said Rubén Xaus.

Joan Lascorz added: “I’m really happy for joining this TV project. I’m sure I will be able to keep enjoying road racing from this new point of view. Sometimes you can feel even more emotion for racing through the TV because you can leave apart the high pressure of being a racer yourself”.

RTVE.es will also be the reference on the Internet for eni FIM World Superbike Championship fans from Spain, thanks to a new dedicated website, whereby they can watch Tissot-Superpole, races and always find up to date information.