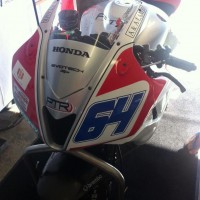 Davies joined the experienced PTR Honda outfit over the winter and will be looking to learn from the team that has finished so close to winning the title on a number of occasions.

After two solid days of testing (following an initial test in Spain), the young Aussie rode with great maturity and ended the test in 28th position overall and a mere 2.4 seconds from the fastest time overall. Matt was also the second fastest graduate from last year’s Superstock 600cc class which is encouraging.

“The test went really well! We had a few issues that we solved and now we are only a couple seconds off the front guys. The track was great and I’m really moving forward with the team and the bike and I’m looking forward to Friday.” enthused Davies after the test.