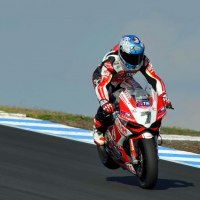 Carlos Checa fired a warning shot to his rivals as the final WSBK test session concluded in Phillip Island, smashing the lap record to put the all new Alstare Ducati Panigale into P1.

Having missed last week’s test through illness, the former world champion looked every bit a threat aboard the red and white Italian machine. Leon Camier who had topped all of the previous winter tests finished 3rd overall just behind Marco Melandri who improved massively on the BMW to take 2nd.

Tom Sykes left it late to put his Kawasaki 4th ahead of a back to form Michel Fabrizio in 5th. Pata Honda’s Johnny Rea and Leon Haslam finished 6th and 7th overall while Eugene Laverty was 8th.

Max Neukirchner missed today’s test and it’s still unsure as to whether the German will ride in Qualifying on Friday.

In the World Supersport class, Sam Lowes continued to dominate on his Yakhnich Motorsport Yamaha. Kenan Sofuoglu was 2nd with his MAHI Kawasaki team-mate Fabien Foret in hot pursuit in 3rd.

Pata Honda’s youngest signing Michael Van Der Mark continued to impress with 4th overall while Spaniard David Salom who is returning to the class elevated himself to 5th. Gabor Talmacsi maintained his strong start to the 2013 season in 6th.

First qualifying for both classes takes place on Friday.