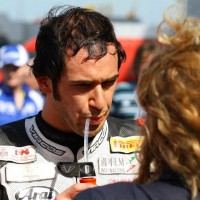 Italian Alex Baldolini who finished a credible 6th equal in last year’s World Supersport Championship has signed to ride with the Lorini Honda team in this year’s series.

The likeable rider made a great impact on the Supersport scene in his debut season and is looking to build on his sole podium of Misano when the 2013 gets underway in Australia in a few weeks time.

The Lorini Honda team has been involved in both the Superstock and the World Supersport Championships in recent years and will be hoping that Alex can take them to the next level.

Speaking after agreeing terms Alex had this to say: “I’m very happy to join forces withLorini Team next season and to take part in the 2013 season on board the Honda CBR600RR. I want to thank Honda Italia and Lorini brothers for having trust in me to ride such a competitive bike. Last sunday I could test the bike at Vallelunga for a few laps and I’m really happy with the bike and the team. I can’t wait to be in Phillip Island to test the bike again and begin the new season.”

In addition, Michael Hill Promotions will continue to represent Alex’s in 2013 by distributing his English press after each race.