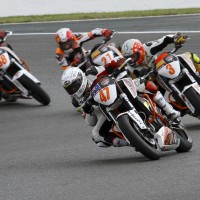 Speaking to Sepp after the race it was clear that the talented rider from down under had learned a lot this year and although not able to repeat his podium of Misano earlier in the year Sepp has strung together an encouraging string of results that should give him confidence ahead of 2013.

“I want to thank my mum, dad and everyone back home. All of my sponsors especially Ray and Held, A big thanks to Michael Hill Promotions for all their coverage, I have learned a lot and I hope to be back again in 2013” commented Sepp before the end of season party which is a tradition within the World Superbike Paddock.

Where Sepp will be riding next year nobody knows just yet, but one thing is for certain we need upcoming riders with a natural talent like his in the paddock.