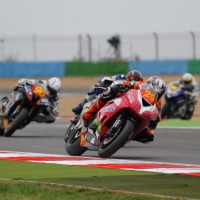 Corey Snowsill from Australia may have only finished in 24th position overall in the UEM Superstock 600cc Championship but the experinece gained this year means the talented 17 year old will be a serious contender in 2013 provided he has the full support from those around him.

Corey started the year riding for the MTM Yamaha squad but changed to GO ELEVEN Kawasaki mid season.
A best result of 9th at Aragon in Spain along with point scoring finishes at Misano and Portimao show that Corey has the speed and race ability to be a front runner.

The final round of the championship was held at Magny Cours on Sunday and it started well, with Corey running inside the top 6 in the opening practice session of the weekend, but some small issues with setup hampered him when it mattered. That said, he still managed to finish just outside of the top 20 in the race despite the bike not being to his liking.

Over the next few weeks, Corey will evaluate his options and hopes to be in a position to announce his 2013 plans soon.