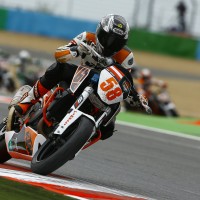 Austrian rider Lukas Wimmer has won the 2012 KTM European Junior Cup after finishing in 3rd position in today’s final round of the championship at Magny Cours in France.

The race wasn’t without incident as both Wimmer and his only remaining title rival Gaston Garcia both tumbled late in the race but were both able to remount and finish in 3rd and 4th places respectively.

With a drying track the conditions were far from ideal but it was the same for everyone and by the end of an exciting 8 lap race it was French rider Giullaume Raymond that (fresh from a podium finish yesterday) claimed his first win in the series ahead of the Ukranian Ilya Mikhalchik who had led in the early stages.

Jamie Patterson, Josh Harland, Christian Vidal, Brandon Kyee, Adrian Pasek, Artur Wielebski and Kaz Hashmi all crashed without injury in a race that many have said was the most enthralling of the season.

The riders and supporters will now look forward to the Official Awards Presentation at 1700 this afternoon.