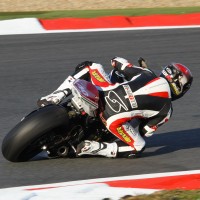 It was disappointing for the MetalCom-Adrenalin H Moto team to end the season in this way but on reflection the season has provided many more ups than downs.

The highlight of the season was 6th position at Monza and had it not been for a couple of small crashes Alen would have ended the championship inside the top 12 overall.

For 2013, Alen and the team are looking at various options and hope to be able to announce their plans shortly.