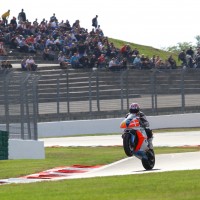 19 year old Danish rider Alex Schacht secured 4th position overall in the UEM Superstock 600cc Championship with a stunning performance in what was arguably the best race of the season at Magny Cours in France today.

Starting 10th, the rider from just outside of Copenhagen was almost involved in a lap one crash but thankfully after taking avoiding action and dropping to 12th he was able to put in a series of impressively fast laps to join the battle for the last step of the podium.

Passing Luca Vitali with 3 laps to go and then easing into 6th Alex looked comfortable but with only one lap remaining decided to settle for another top 6 finish and with it (due to Adrian Nestorovic’s demise on lap one) 4th position in the overall championship standings.

“I am so happy” commented Alex after the race. “I have learned so much this year and over the last part of the season I’ve made some great results. I want to thank the whole team especially my mum and dad who have been there for the whole journey. We are a small family team so this result is for all of us!”.

Schacht Racing are also the first privateer team in this year’s championship.