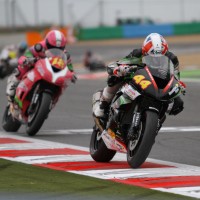 After two crashes in qualifying, Australian Matt Davies started the final race of the UEM European Superstock Championship in 25th but after a usual lightning start he soon found himself inside the top 20.

By half distance Matt had joined the battle for 12th but unfortunately a small problem prevented him from climbing any higher up the order and he had to settle for 15th at the flag.

The result was a solid one and Matt can now look forward to competing on a Supersport machine in a support race at the Australian Moto GP later in the year.

At the time of writing Matt is unsure of his 2013 plans but if all goes according to plan we should be able to announce something soon.