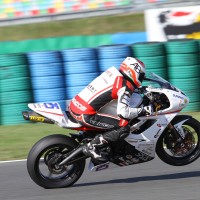 The Magny-Cours circuit in France is the 3rd circuit in a row that the Italian rider has never ridden at which makes his grid position even more impressive.

The weather conditions yesterday restricted Alex’s ability to find a competitive setup and a small crash in the opening dry session also hampered him early on in the weekend.

The final qualifying session saw Alex again working hard on setup and his final lap was executed perfectly to ensure that the likeable Italian will be in a strong position to consolidate 7th overall in the World Championship standings in his debut year in the World Supersport Category.

Tomorrow’s race will run over 20 laps and is due to start at 1330 local time.