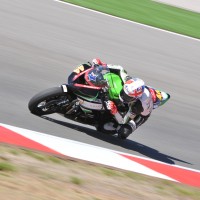 The 9th round of the UEM European Superstock Championship was held in blustery conditions earlier today at the Portuguese circuit of Portimao.

Australian Matt Davies had qualified in 14th and was looking forward to challenging for the points once again riding his Racedays Kawasaki.

After an average start, the talented youngster had moved into 12th and looked certain to join the battling riders ahead when entering the final turn he slid out of contention.

Obviously disappointed, Matt will head to the final round of this year’s championship keen to end the season on the sort of form that he has shown throughout 2012.