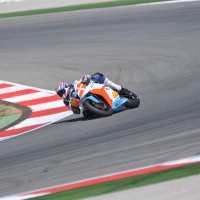 Alex Schacht showed true fighting spirit with a gutsy ride to 6th in the penultimate round of the UEM Superstock 600cc Championship.

Having narrowly missed out on the front row of the grid the likeable Danish rider made a solid start and soon latched onto the 5 rider group breaking away at the front.

Remaining calm, he soon was up to 4th and looked in total control as he latched onto the battle for the podium.

As the race wore on though the grip levels became less and less and Alex slowly started losing the pace with the top 4.

Coming out of the final corner he overtook Christian Gamarino in an excellently judged manoeuvre to rescue another top 6 on the line.

In Parc Ferme, Alex was clearly in a lot of pain and it soon became clear that an injury from Silverstone last year played a part in his not being able to challenge for the podium until the end.

This results means that Alex is now just one point behind Luca Vitali from Italy in the battle for 5th place overall in the championship standings.

The final round of the UEM European Superstock 600cc Championship takes place at Magny-Cours, France, in two weekends time.