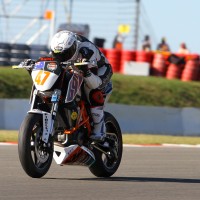 Character building is one way of describing the German round of the KTM European Junior Cup at the Nurburgring for Aussie youngster Sepp Scarcella.

Having been plagued by sickness, the talented rider from Australia dug deep to qualify on row 3 but any hopes of repeating his podium finish at Misano earlier in the year were dashed by a faulty gear lever just 3 laps into the race.

After the cancellation of the Italian race at Monza earlier in the year, the series organisers have arranged for two races to be run at the final event of the year in France in 3 weeks time. This means a total of 50 points up are still up for grabs and also that this year’s champion won’t be crowned until the final chequered flag of the season has been waved.

“This is the worst weekend of my career. I have been unwell all weekend and then to make matters worse we had a technical issue in the race so I am very upset right now” commented a dejected Sepp after the race. “The main thing is to look forward positively to Magny–Cours. We have two races there so with two good rides I can still finish inside the top six overall”

The final two races of this year’s championship take place at the Magny–Cours circuit in France across the first weekend of October.