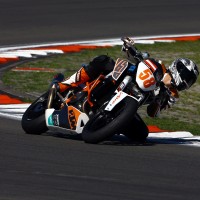 As the lights went out to start the European Junior Cup race at the Nurburgring it was Spaniard Gaston Garcia who headed the tightly bunched pack into turn one.

Wildcard rider Robin Stehr slid out of contention almost immediately but was able to remount and continue as did Jean-Francois Demoulin who also crashed out of the opening lap. Both riders were uninjured.

As the riders completed the opening lap, Lukas Wimmer from Austria had taken the lead with Garcia hot in pursuit but as the laps unfolded Wimmer eased clear.

That left Garcia to fend off a barrage of attacks from all sides at almost every turn for the remainder of the race as Artur Wielebski, Javi Orellana, Christian Vidal and wildcard Kyron De Lange joined the battle for the final two spots on the podium.

Eventually Wimmer would take the chequered flag 6.4 seconds clear of Garcia and Wielebski who completed the podium. Orellana grabbed 4th on the line from De Lange and Vidal but less than half a second covered all five riders as they crossed the line.

Italian Federico Fazzina finished a credible 7th just ahead of Adrian Pasek who was unable to produce the pace that he had in qualifying. Stinius Viking Odegard fought back from a moment early in the race to claim 9th with Szymon Kaczmarek finishing tenth.