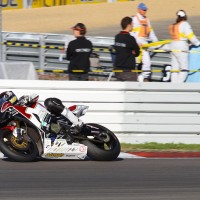 Round 8 of the FIM Superstock Championship took place in sunny conditions at the historic Nurburgring circuit in Germany earlier today.

Hungarian rider Alen Gyorfi battled through the discomfort of an injured knee to qualify in a respectable 14th position on the grid aboard his MetalCom Adrenalin H Moto Honda.

The race started in typical Superstock fashion with the best upcoming riders all close together into the first turn. Alen maintained his position throughout the opening lap, and by half distance had settled into a rhythm which saw him battling for 13th.

As the battle at the front raged, the battle for 11th was intense with five riders locked together. Hungary’s only representative in the FIM Superstock 1000cc Championship was victorious his own private dual, finishing just outside of the top ten.

The penultimate round of the championship is at Portimao, in Portugal on September 24th, 2012.