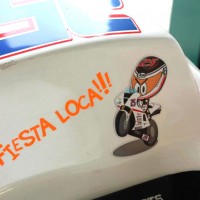 Having qualified in 9th the Italian didn’t have the best of starts having been caught out looking at fellow rider Sam Lowes who subsequently jumped the start.

After a modest start and an off track excursion at the final corner, Alex found himself in a race long battle for 10th.
As always Baldolini used all of his experience and racecraft to mix it with the group of riders around him but by the time the race ended he had to be content with 11th.

“My start was bad because I was looking at Sam and when he went I almost followed him. Then I made a mistake at the end of the straight because I was wanting to make up places fast. The result is not so bad because I did close some points on the riders ahead of me in the championship. The next tracks I have never been to so this will be a nice challenge for me” commented Alex after the race.”

The next round of the 2012 World Supersport Championship takes place at the Nurburgring circuit in Germany in two weekends time.