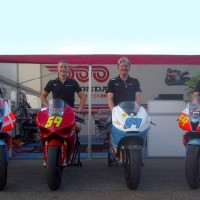 18 year old Alex Schacht swapped his usual racing in the UEM European Superstock 600cc Championship (which supports the World Superbike Championship) to contest several races aboard both his Honda 600cc machine and a Ducati Panigale this weekend at the Swedish circuit, Ring Knutstorp.

In addition his Schacht Racing team used the event to showcase the paddock facility that they hope to use in the 2013 European Superstock Championship when they also to hope to run additional riders.

After setting personal best lap times on both the Honda and Ducati, Alex made good use of his front row starting positions in both classes to dominate the Supersport 600cc races, winning each race by over 7 seconds and setting a new lap record in the process.

The Superbike races would see Alex fighting hard until the end on both occasions and having taken a comfortable 2nd place in the first race, he took a well earned 2nd in the final Superbike race after being involved in a four way tussle for the victory.

Alex and the team were also filmed throughout the weekend by MPH TV who were on site to create the team’s new promotional DVD which will be used to attract new riders and sponsors to the team over the coming months.