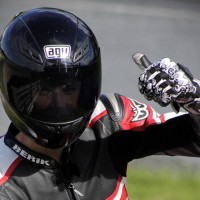 In a carbon copy of yesterday’s race, the talented youngster held his nerve until the final turn of the final lap to pass Theng Wanwatthana (this year’s champion) and grab another podium finish.

The result cements Truls as this year’s Vice Champion which in itself is a great achievement considering he has been competing for less than a year.

Delighted with his double podium, Svendsen can look forward to 2013 with great optimism when he will make the transition to the Rookie 600 series.