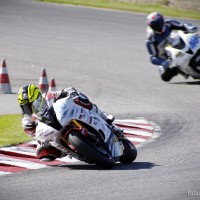 14 year old Norwegian racer Stinius Viking Odegard made a rare outing in his native Norway when he contested the final 2 races of the Norwegian Stock 600cc Championship on a Yamaha.

The talented youngster who contests the KTM European Junior Cup (which runs alongside the World Superbike Championship series) looked every bit a match for his older more experienced opponents.

Improving his laptimes throughout the practice sessions, Stinius qualified on the second row and after two hard fought races today was satisfied with an impressive pair of sixth places in the Norwegian sunshine.

After a fairly lonely 6th in race one, race two saw Stinius challenging for 4th for much of the race until a small mistake at the chicane meant he had to settle for 6th.

Stinius returns the WSBK paddock in two weekends time to contest the penultimate round of the KTM European Junior Cup where he is looking to build on his season’s best 5th from Brno.