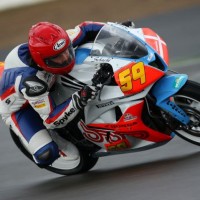 Danish rider Alex Schacht made the most of the first race stoppage to collect another 13 points for his second successive fourth place finish in the restarted race at Silverstone earlier today.

Having not been totally comfortable with the way the bike was handling the SCHACHT SBK ONE Honda team sprung into action to make some changes when the initial race was red flagged, and Alex rode much more confidently to once again finish just off the podium in the re-run.

The result moves him up the standings to 7th overall just 6 points behind his season’s target of 4th.

The next round of the championship is at the Nurburgring (a track that Alex knows well) on September 8th.