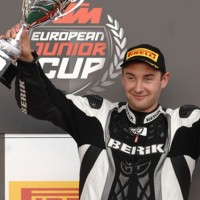 British rider Jamie Patterson showed his form at Monza in the rain earlier in season was no fluke with a fantastically timed move on wildcard rider Connor Parkhill in the final chicane to take victory at Silverstone.

It was Patterson who got the holeshot but as the riders emerged through the spray at turn two it was the consistent Jean-Francois Demoulin who was heading the field.

Championship leader Lukas Wimmer made a good start but crashed early on, remounted and then retired with a technical problem.

The wet conditions didn’t dampen the on track action as the leading group of eight battled it out in the early stages.

Moto Vudu Wildcard entry Josh Daley who took a sensational pole position on his debut yesterday crashed out of contention on lap 2 as did Demoulin while the second British wildcard rider Connor Parkhill moved into podium contention.

At the flag it was Patterson who took victory with a perfectly timed move into the final chicane just holding off Parkhill to the line.

Kyee held his nerve to claim a debut podium ahead of Garcia, Pasek, Mikhalchik and Sepp Scarcella in 7th.

Szymon Kaczmarek got the better of his team mate Artur Wielebski to finish 8th and Christian Vidal rounded out the top ten.