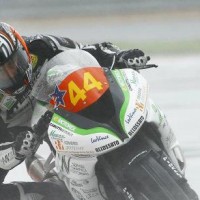 Matt Davies slid out of a potential debut win in wet conditions at Silverstone earlier today.

Having previously led the first attempt to run the race, the talented Aussie got to the front early on in the re-run and was looking strong. However the reigning European Junior Cup champion lost control and crashed luckily being avoided by the riders behind.

Despite this disapointment Matt has shown once again that he has front running pace in both the wet and dry and is confident of being back at the sharp end in Germany when the championship resumes in early September.