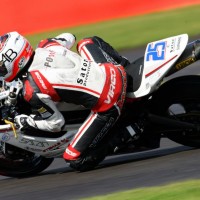 The 7th round of the World Supersport Championship took two attempts to complete following an initial red flag following an incident between Matthew Scholtz and Dan Linfoot.

When the race did finally get going it was the PTR Hondas of Sam Lowes, Jules Cluzel and Ronan Quarmby that made the early running with Suriano Triumph’s Alex Baldolini starting strongly in 5th.

With the leading four slowly edging away Alex found himself in a seven rider battle with the Italian having to make some hard but fair moves to stay in the chasing pack.

By half distance the battle between Alex and the others in the group still raged and was doing all he could to hold on to 8th, a position that he managed to cling to until the flag.

The race was eventually won by Jules Cluzel ahead of his team mate Sam Lowes with Australian Broc Parkes claiming the final podium place.

After the disappointment of not finishing at Aragon and Brno, Alex is pleased to be back on the scoreboard and is looking forward to battling hard again in the remaining three championship races.

The next round takes place at the brand new Moscow Raceway in Russia on August 26th, 2012.