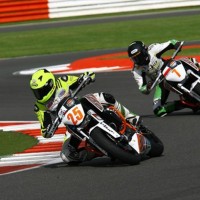 The British youngster has been the surprise of the weekend showing great speed both yesterday in the dry and again today in the wet qualifying session.

Championship leader Lukas Wimmer was looking like he had the fastest time in the bag to add the Silverstone pole position to his victory in Brno until Daley launched his attack.

Wimmer held on to secure another front row start ahead of Jamie Patterson who once again excelled in the damp and the second of the British wildcard riders Connor Parkhill in 4th.

Ilya Mikhalchik will start 7th ahead of Aussie Sepp Scarcella who improved late in the session to complete the second row.

The 6th round of the championship is scheduled to start at 1435 tomorrow over 9 laps.