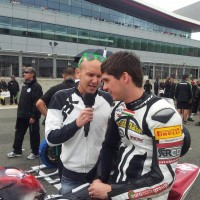 Hungarian rider Alen Gyorfi showed his skill at mastering changeable conditions to grab 9th position on the grid for the British round of the FIM Superstock 1000cc Championship at Silverstone.

Leaving his charge until the latter part of the session, the Adrenalin Honda rider moved from 19th to the second row only to be bumped down to 9th with a few seconds to go.

After the disappointment of Brno where he could manage only 14th due to a technical problem, Alen is confident of fighting at the front in tomorrow’s race.