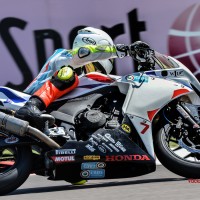 Alex Wisdom’s qualifying session in Imola ahead of the third round of the PATA European Junior Cup was over almost as soon as it began as the American youngster crashed out on his second flying lap leaving him 19th on the grid.

With the intention to push from the start, Wisdom was already significantly faster in sector one of the lap than yesterday when at the Tosa Hairpin he had a coming together with British rider Stefan Hill, the pair sent sliding into the gravel.

Alex immediately tried to restart but after noticing damage to the clutch was unable to return to the pits during the session meaning a seventh row grid start for tomorrow’s race.

Nevertheless, he is confident that the feeling he had with the CBR500cc Honda was better than yesterday and with this in mind is optimistic of adding a number points to his already impressive tally. 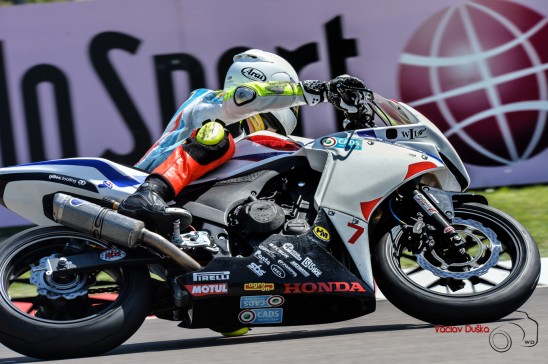 Alex Wisdom – 19th on the grid: “Qualifying didn’t go as planned but I am still confident for tomorrow. I was on my personal best lap of the weekend but unfortunately I had a coming together with Stefan Hill and we both went down. I’m ok and dad can fix the bike which is the main thing. Thanks to everyone at CADS racing il be pushing to be in the points tomorrow.”