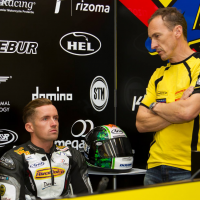 After a short delay to proceedings following dust and sand on the track, Jack Kennedy and Edik Blokhin took their Rivamoto Honda’s onto the sun-kissed Turkish track.

The session was for the most part uneventful with both riders learning the new circuit and working on a solid base setting for the remainder of the weekend.

In the last few seconds of the morning session, Kennedy lost the front end of his CBR600cc machine in an uncharacteristic tumble, but was able to make it back to the garage thankfully unhurt and with very little damage to the bike.

Qualifying was held in slightly warmer conditions with the track temperatures climbing to 50 degrees celcius but that didn’t stop both Kennedy and Blokhin from improving their personal best lap times almost immediately.

After making adjustments with new Ohlins suspension settings and moving onto a new tyre that Pirelli brought along for this race, Kennedy went back out onto the circuit for his usual late push and after setting two personal best sector times was unable to improve in the final part of the lap due to difficulties finding clear track. This meant an overnight grid slot of 16th for Kennedy while Edik Blokhin ended the session in 31st position.

Both riders will now regroup and look ahead to tomorrow and the final qualifying session, and with forecasters predicting another dry day, they have every chance of improving further up the starting grid.

Jack Kennedy – 16th on the provisional grid: “Today was a difficult day. Maybe it’s because it’s Friday 13th. We were unlucky with the crash in FP1 and ended 18th. This afternoon we went a second quicker in qualifying but still only 16th but I never managed to get that clear lap. The weather shouldn’t be a factor tomorrow so we will continue to work hard and hopefully improve our starting position.”