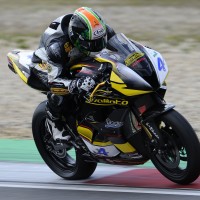 Nostalgic Nurburgring in the Eiffel mountains was another new track for Jack Kennedy but that didn’t stop the Dubliner from placing the Rivamoto Honda firmly on the provisional second row of the grid in 6thposition.

Satisfied with the morning free practice session in which Jack was just outside of the top 10, the lap times immediately tumbled when official qualifying got under way and Jack was soon in 7th position in the standings.

There were concerns over the best tyre choice for qualifying and as the Rivamoto team worked hard to give Kennedy the best set up, minor suspension changes were made with 30 minutes of the session to go.

Saturday’s weather forecast is mixed, with some people predicting rain ahead of final qualifying so with this in mind and having dropped to 13th position overall, team manager Jeremy McWilliams made the decision to pull Jack back into the pit garage to make the most of the time remaining with new rubber.

The team planned things perfectly with Kennedy re-joining the circuit directly behind the front running riders. In typical Kennedy style, Jack improved his time on his first flying lap and moved back into the top ten before improving again to 8th and then again to 6th, securing another 2nd row start on the provisional grid. 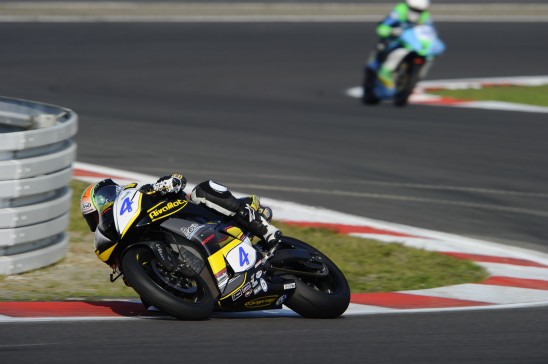 Jeremy McWilliams – Team Manager: “Once again it’s just a combination of the team reacting to what Jack likes and finding something that he is comfy with early enough in the session to allow him to do what he does best. He likes to be left alone to ride once we have done our job and he proves week in and week out that he is up there with the best riders in the series. Our job now is to keep moving forward and not to make any mistakes for the remainder of the weekend as we have secured a good solid starting position in the opening session. There is always a trade off in terms of how many laps to do and I’m sure he hates me for going on at him about going out on old rubber all the time but it seems to motivate him. It’s a lot of fun when it’s working as well as this. Jack’s results give the team a lot of pleasure when he is on his game like he was today.”

Jack Kennedy – 6th position: “Today was another great day at another new track. I’m really getting to grips with the Nurburgring, and am enjoying riding here. This afternoon we really moved forward with the Rivamoto Honda. I would have been pleased to be inside the top ten but to be 6th I’m even happier. We are looking for a few small bits in terms of set up that will hopefully allow us to improve the lap time even more. Thanks to the team, they made another great job and I am looking forward to tomorrow.”