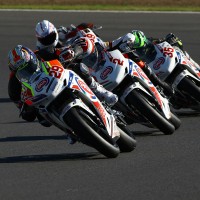 Jake Lewis became the first rider to win 2 races in the PATA European Junior Cup race held at Silverstone in the UK this afternoon.

Starting from 8th position on the grid, the determined Kiwi was leading at the end of the opening lap before being involved in a titanic fight with 13 other riders for the next 6 laps.

We are used to the EJC races being close and today’s race was no exception, with no less than 8 different leaders in the opening 3 laps and at time riders seven abreast into the fast right hander at the end of the straight.

With positions changing faster than anyone watching could track it was difficult to predict the final outcome and as the riders were half way around the final lap, a collision including several of the leading bunch brought out the red flags meaning the result would be taken from the previously completed lap.

This gave the victory to Lewis, who was also victorious in the season opener at Aragon, James Flitcroft claimed a superb second position in front of an appreciative home crowd while Hungarian Richard Bodis secured his second podium placing in 3rd.

Javier Orellana (Spain) was visibly disappointed to be awarded 4th, ahead of Robin Anne (France) and Augusto Fernandez in 6th.

Swede Jesper Hubner claimed his best result of the year in 11th, Zac Levy was back in the points in 12th ahead of ever improving Estonian Hannes Soomer who was classified 13th at the flag.