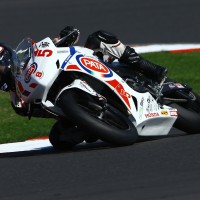 The official qualifying session for the PATA European Junior Cup powered by Honda took place in thankfully dry and sunny conditions earlier this afternoon with Frenchman Guillaume Raymond, who currently leads the series by 4 points, notching up another Pole Position to his already impressive tally.

The session was as always nail biting with the top spot changing a number of times throughout. Firstly Javier Orellana (Spain), then Italian Kevin Manfredi posted circuit best laps before Raymond responded.

The top 9 riders are covered by less than a second and with dry weather forecasted for race time tomorrow, we can expect an intense battle at the front for the overall victory.

Manfredi clung on for second position just ahead of Orellana who claimed his first front row start of the year.

Robin Anne (France) and Jake Lewis (New Zealand) improved late in the session to secure 7th and 8th places respectively while Michael Canducci who has been a consistent front runner all year rounding out row 3.

Others to note are Josh Harland who was 12th, Stefan Hill who was 17th, wildcard Fraser Rogers (18th), Blayes Heaven (31st) and Carl Stevens, who is also making a wildcard appearance and looking to impress the home crowd in 32nd.

The 7 lap EJC race is scheduled to start at 1435 local time.