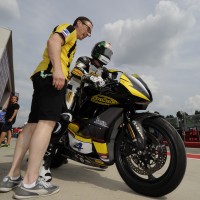 Jack Kennedy will line up on row 8 of the grid in tomorrow’s 7th round of the World Supersport championship after a crash early in final qualifying halted the Dubliners progress.

Jack’s crash is a bitter disappointment to the Rivamoto team who are having their best season to date.

Nevertheless, Jack has proved throughout his impressive debut season that he is a charger and both he and the team are relishing the chance to show their fighting spirit tomorrow.

Edik Blokhin had a day, improving his times from yesterday ensuring his place on tomorrow’s grid is also secure. 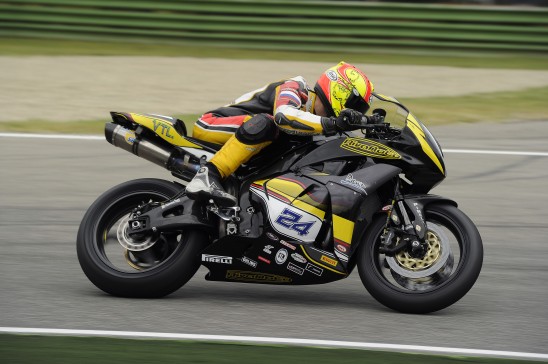 Jack Kennedy – 22nd on the grid: “We made a few changes for qualifying that were better but we only got two laps before I hit a neutral. I was in a nice space on the track and feeling comfortable when I hit the neutral and just couldn’t stop. I just touched Antonelli and we both went down. Big apologies to Andrea, I am glad that he is ok. All we can do now is repair the damage and let’s see what we can do tomorrow.”

Jeremy McWilliams – Team Manager: “We’ve had such an good record in terms of crashes so it was going to happen at some point. I am glad that Jack is ok and also that Antonelli is uninjured. It was a case of wrong place, wrong time for him. We will get the bike fixed overnight as with the one bike rule we were unable to get back out in that session. Starting 22nd will be tough but we have already seen time and time again what Jack is capable of, so a point scoring finish is not out of the question tomorrow. On the other side of the garage, Edik has been making progress all day and he will take his place on the grid tomorrow which is great for the team, having both riders in the race.”

Jack Kennedy – 22nd on the grid

Edik Blokhin – 36th on the grid