After this morning’s free practice and 3rd position overall, the Rivamoto Honda team were optimistic of a strong showing when final qualifying took place for round 5 of the World Supersport championship at Donington Park this afternoon.

With conditions almost perfect, Jack Kennedy made an instant impression posting the 3rd fastest time, which he would hold until the end of the session when a case of being in the wrong place at the wrong time meant a row two start in tomorrow’s 22 lap race.

Florian Marino knocked Jack into fourth with ten minutes to go before the hard charging Dubliner responded to retake the position.

A quick tyre change on the Rivamoto Honda and Kennedy returned to the track for his customary final attack. However despite being on successive personal improvers a combination of traffic and a crash by Glen Richards and Alex Schacht prevented any further improvement.

As the flag came out Jack was classified 6th, achieving another solid grid slot and giving the Rivamoto team something to cheer about. 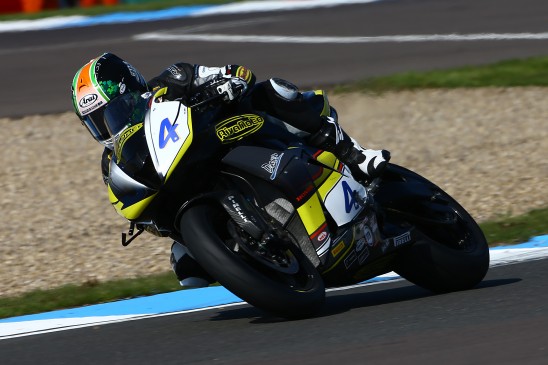 Jack Kennedy – 6th position: “It was a good session and we were consistently fast which is important. The Rivamoto Honda is working well and we have a good race pace. I’m still getting arm pump which affected me a little when I wanted to push but with a couple of riders crashing on my faster laps and a lot of traffic there was nothing I could do. I’m a little disappointed to miss the front row after being in the top 3 for most of the session but row two is a good place for us to challenge from tomorrow.”

Jeremy McWilliams – Team Manager: “We are all pleased with the second row. Jack has been consistently fast all day. We got nudged back right at the end by a couple of one lap wonders but overall we are satisfied and more importantly consistent, which puts us in a strong position for the race tomorrow.”