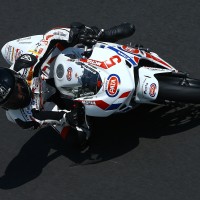 Frenchman Guillaume Raymond has taken his second consecutive Pole Position in official qualifying at Monza for the 3rd round of the PATA European Junior Cup powered by Honda.

The talented youngster was in a class of his own, ending the session more than 0.7s faster than his nearest rival, but Raymond knows all too well that the race tomorrow will be a completely different story.

Guillaume Raymond – Pole Position: “Today was really good but of course it’s not the race. I had the pole position in Assen and because there are so many fast riders I didn’t win. Monza is very fast and in a race situation I am expecting a big fight but I will do my best to make the podium tomorrow.”

The session was stopped after ten minutes because of debris on the track from a fallen rider, with Illan Fernandez in top spot. No major changes happened until the final 5 minutes of the session when Raymond put in a lap to move clear of the others.

Fernandez hung onto second until his namesake and compatriot Augusto Fernandez  jumped ahead of him and onto the front row in the dying seconds.

Adrien Pittet was one of the riders to fall before the session was halted but such was the Swiss riders pace that he will still start the race from row the third row. Lorenzo Garofoli and Robin Anne will complete row 3.

James Flitcroft put in another strong performance to grab 10th, ending the session a fraction ahead of fellow British rider Josh Harland who will start 11th.

Championship leader Michael Canducci had to settle for 12th position on the grid after being caught in a group of riders which prevented the Italian for challenging Raymond’s time. 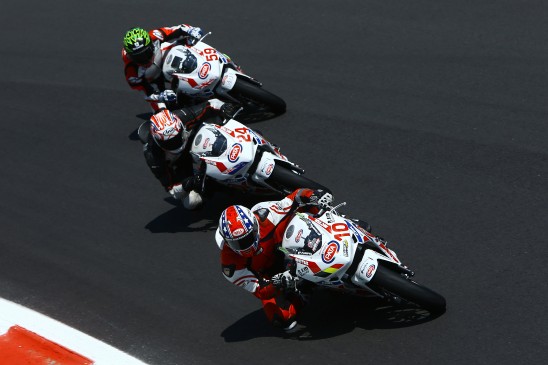 The PATA European Junior Cup powered by Honda has provided some close and exciting racing so far this season and with Monza being renowned for slipstreaming battles to the flag, tomorrow’s 7 lap race shouldn’t disappoint.