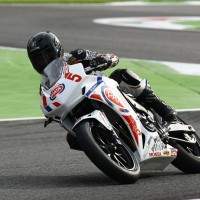 With the opening two races of the 2013 PATA European Junior Cup powered by Honda being won by less than 0.006s, the infamous Monza circuit in Italy plays host to round 3 this weekend.

Free Practice was held earlier today on a track that was drying by the minute following an earlier downpour, and with all riders aboard equal Honda CBR500ccR machines nobody could predict who would come out on top on.

Italian Kevin Manfredi was the initial pace setter, while Chris Kosnan was an early faller. Thankfully though, the young American was able to fix his machine and make it back onto the track before the end of the session.

It was difficult not to confuse today’s free practice with what is expected to be an ultra close race on Sunday, as at times, the talented champions of the future went over the start and finish line six abreast.

Illya Mikhalchyk from the Ukraine and Richard Bodis from Hungary each took a turn at the top of the standings before Raymond, who took Pole position at Assen returned to the front.

Augusto Fernandez who was a wildcard last time out is also wildcarding here and was again fast, finishing second overall ahead of Kiwi Jake Lewis who won the season opener at Aragon.

4th was Manfredi ahead of Indonesian rider Ali Adriansyah Rusmiputro and Bodis who completed the top 6.

Former Red Bull Rookie James Flitcroft was the top British rider a fraction ahead of Mikhalchyk (who tumbled late in the session), Josh Harland, Javier Orellana and Lorenzo Garofoli (who also crashed) 15th.

Norwegian rider Stinius Viking Odegard was given a warning for speeding in the pit-lane but still ended up 19th overall.

Female racers Sabrina Paiuta and Amelie Demoulin were 25th and 34th respectively on their CBR500ccR machines.