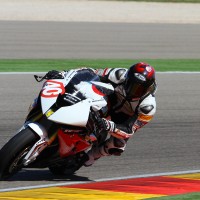 H-Moto rider Alen Gyorfi decided at the last minute to debut his all new BMW machine at Aragon this weekend despite indicating that due to a lack of testing he would begin his 2013 FIM Stock 1000cc Cup campaign on last year’s Honda.

Speaking after the opening qualifying session in which he claimed a provisional 21st on the grid, Alen was optimistic about things improving throughout the weekend and the upcoming season.

Alen Gyorfi – H-Moto BMW: “The biggest thing is the engine. It already feels much stronger than the Honda. We need to use this weekend as a test but I really hope that we can at least finish with one point and move onto Assen and Monza when things will be better as I will understand the bike more.”