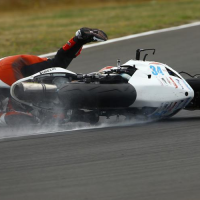 Com Plus SMS Honda’s Balazs Nemeth is looking to kickstart his championship when the World Supersport championship resumes at Motorland Aragon in just over a month.

The Hungarian rider was riding well in Australia qualifying in a provisional 13th position after opening qualifying and looked like being a strong challenger for a possible top ten finish on race day but a crash towards the end of that session left Nemeth nursing a broken collarbone.

The team are pleased to announce that Balazs is responding well to treatment meaning he should almost certainly be fit to start the next race.

“I had a successful surgery after I broke my left clavicle in Phillip Island in QP1. My rehabilitation began immediately with the leadership of Dr. Attila Pavlik. They will remove my stiches shortly and then an intensive phase of rehabilitation will begin. According to the doctors I am able to ride 4-6 weeks after the crash but we are speeding up the healing with alternative therapies so I have a good chance to be on the grid in Aragon.” Commented Balazs earlier this week.

Both Nemeth and the team are optimistic of featuring well in the remaining rounds of the series and are targeting consistent top ten finishes as the season progresses.