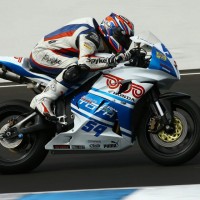 The opening round of Alex Schacht’s 2013 World Supersport campaign lasted a little more than five minutes as clutch problems on his Racing Team Toth machine forced the rider from Denmark into retirement.

The failure to finish his debut WSS race completed an up and down weekend for the youngster who also suffered technical problems during practice and qualifying in addition to two huge crashes.

Alex will now regroup and be ready to fight again when the championship resumes at the Motorland Aragon circuit, Spain for round two in April.

Alex Schacht (DNF) – ‘I didn’t even get one lap before the clutch broke. The whole week has been a learning curve. I am very pleased with the progress we have made, but I am looking forward to the next race at Aragon. We will be ready!’