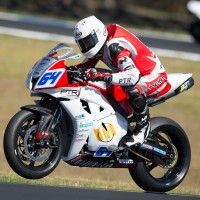 The home crowd certainly had something to cheer about in the opening round of the World Supersport championship at Phillip Island earlier today as the youngest full time competitor within the series rode with great maturity to finish his debut WSS race in 20th position.

Starting 29th, the Aussie hotshot was up to 23rd place by the end of the opening lap.

The race was shortened to 15 laps because of tyre wear concerns and the remaining 14 laps would see the 17 year old former European Junior Cup champion locked in a battle with his PTR team mate Nacho Calero.

The championship moves back to Europe for round two which is to be held at Motorland Aragon, Spain in April.

Matt Davies (20th) – ‘I am so happy to finish my first World Supersport race. I got a pretty good start but went a bit wide in the first corner. I have only raced at Phillip Island twice before so I am pretty happy with 20th. The team are fantastic and I am going to learn a lot from them. I am looking forward to the start of the European part of the series now.’