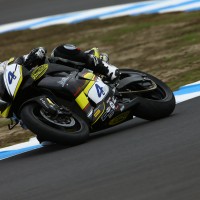 Dubliner Jack Kennedy maintained his overnight 5th position on the grid to secure a second row start for the opening round of the World Supersport championship in Phillip Island, Australia tomorrow.

The Rivamoto Honda rider improved his lap times in final qualifying and was unlucky to miss out on the front row due to a small rear grip issue towards the end of the session.

The team’s other rider, Edik Blokhin also improved his lap times and will start the race from 30th position.

Jack Kennedy (P5) – ‘I’m really happy to maintain this position, other riders went faster and we had to dig deep but it worked out great. Realistically I am aiming for the top 6 but would dearly love a podium. I’m under no illusions how hard this will be but I’ll be giving it my all’

Jeremy McWilliams (Team Manager) – ‘We’ve only had to make small changes on the bikes today, seeing Jack up into 3rd during the qualifying was something else for his first time racing at this level. The team are over the moon for him and he seems to be loving the time on the Honda and this track. Phillip Island probably rates as most riders’ favourite place and I think it’ll be Jack’s after this! Edik is getting to grips with the speed of this place and getting faster. Hopefully we can keep up the momentum tomorrow.’