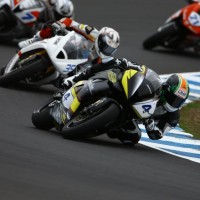 Rivamoto Honda’s Jack Kennedy continued to impress in qualifying for the opening round of the 2013 World Supersport Championship earlier today.

The team’s other rider Edik Blokhin has qualified provisionally in 31st position and is confident of further improvement tomorrow.

Jack Kennedy (P5) – ‘I’m delighted to be up near the front and hope to stay there tomorrow. The Honda is working really well and we have plenty of speed, worked on set-up from the data that we got earlier in the week and it all came together. I am still trying to get used to the speed of Phillip Island, I really love the track, it’s brilliant.’

Kostja Zotov (Technical Co-ordinator for Edik Blokhin) – ‘A good start to the weekend and we are moving forward according to the plan. It is only the first weekend with the Honda’s but we are working hard together, Edik is learning the new bike and track but is confident and improving every time.’

Jeremy McWilliams (Team Manager) – ‘The team are really impressed with Jack’s progress on a track he’s never seen! He has worked very well with the team and shown that he is a very special rider. Today was a very difficult day with many stoppages early on but Jack wasn’t fazed and just got on with the job.’

The team have switched to Honda machinery for this season and are understandably ‘over the moon’ to be featuring so strongly so early in the season.