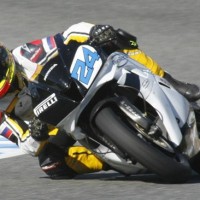 With 24 hours to go until the opening round of the 2013 World Supersport Championship we are pleased to announced that Rivamoto Honda will use MHP to assist with their English media exposure in 2013.

The team is run by former GP winner Jeremy McWilliams who is also responsible for the technical direction of the team and will run Jack Kennedy and Eduard Blokhin in this years’ series. The team will also run Honda for the first time in 2013 after taking hold of the machines previously ridden by Sam Lowes and Jules Cluzel (both race winners last year).

Both riders were in action during the official tests at Phillip Island earlier in the week with Kennedy finishing in 23rd position overall and Blokhin 35th with both riders happy with the developments made.