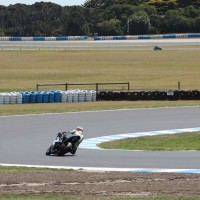 The former 250cc, Moto2 and WSS podium finisher switched from Triumph to Honda during the winter and has had little testing aboard his new machine.

The likeable Italian ended the final test sessions in 12th position overall and is confident that he can improve in qualifying ahead of the opening round of the championship on Sunday.

“Today was better. We made some more changes and I improved my time from yesterday within 3 laps. On my final lap today I was going pretty fast but there was some traffic which meant I didn’t improve again. I am confident that we can go faster and I am looking forward to qualifying and the race.” commented Alex.