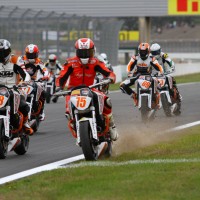 Lukas Wimmer may have won again in the penultimate round of the 2012 KTM European Junior Cup but Spaniard Gaston Garcia did his hopes of winning the championship a power of good with a hard fought 2nd place at Magny Cours in France earlier today.

After taking to the grass early on the opening lap to avoid Wimmer, Garcia was unable to shake off the group of eight riders behind, and clung on to second ahead of the very fast Wildcard Giullaume Raymon who took 3rd.

Artur Wielebski took an encouraging 4th ahead of Adrian Pasek and a retourning Josh Harland who took 6th.

7th place for Christian Vidal now rules him out of the championship fight tomorrow while the youngest rider in the series, 14 year old Stinius Viking Odegard took a spirited 8th.

Javi Orellana, Jean-Francois Demoulin and Jamie Patterson crashed out meaning that in tomorrow’s final race only Wimmer or Garcia can now triumph in the overall championship standings.